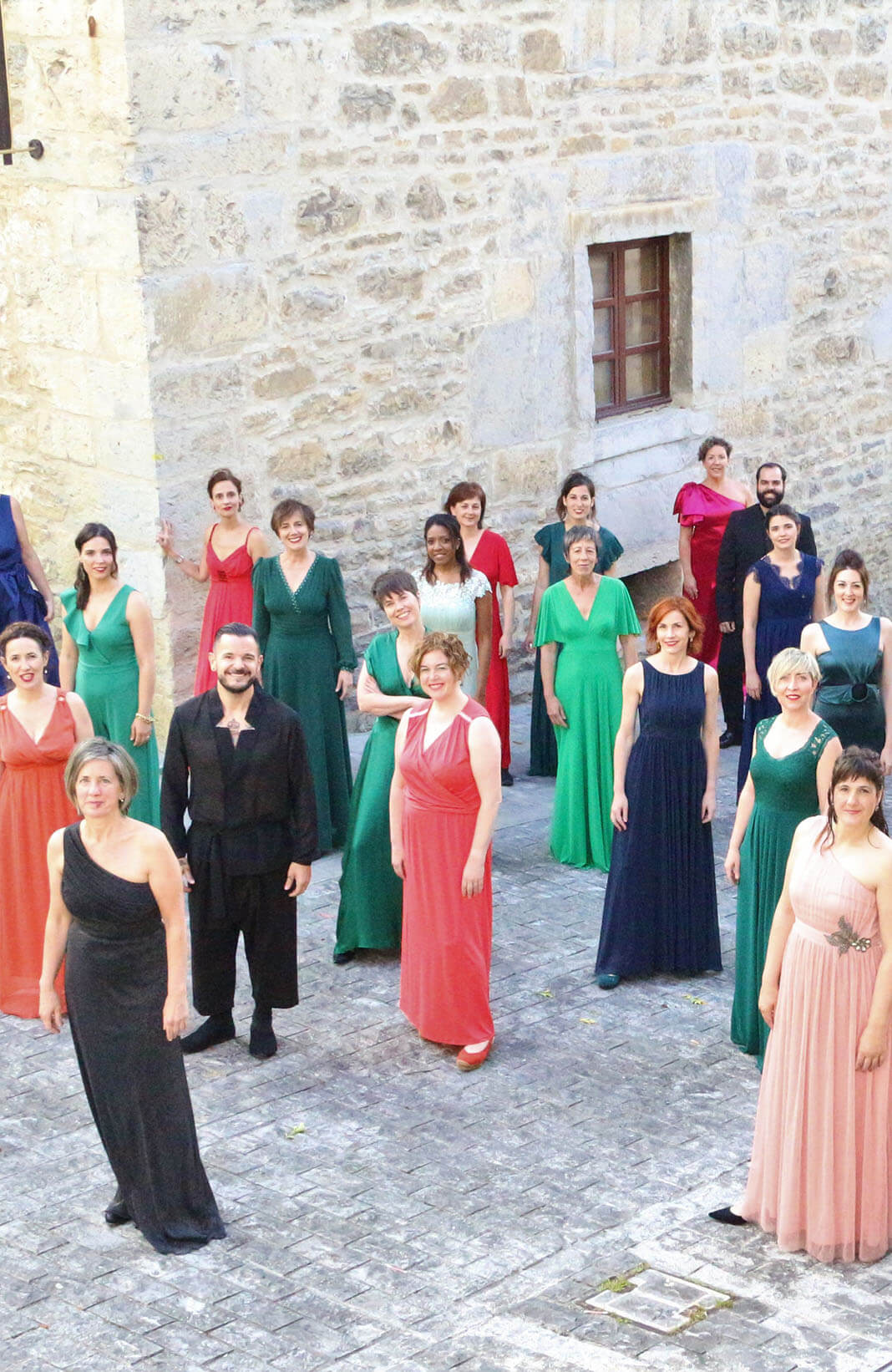 The female vocal group Vocalia Taldea began its professional career in 2000. Created by the initiative of its current director, Basilio Astulez, Vocalia Taldea is a project which embodies the pursuits and musical concerns of young women from the Basque Country. The project is focused on the firm intention of creating a stable vocal group that offers a repertoire that, for reasons of musical and vocal demand, is not usually interpreted.

Vocalia Taldea currently consists of around 35 singers from Araba/Álava, Bizkaia, Gipuzkoa,Navarra and the Rioja, with extensive experience in the world of choral performance. Their risky programming and careful staging make the group a reference in the current choral performance scene.

Vocalia Taldea preferably performs a cappella music, from classical to contemporary music, both Basque and international. Likewise, it carries out intense research work on the repertoire of the XX and XXI centuries and incorporates new musical creations thanks to the contribution of avant-garde composers, which enables innovation and expansion of the expressive potential of the group. This commitment has led Vocalia Taldea to commission and debut more than a dozen works to authors from around the world, collaborating closely with a large number of composers.

Since its inception, Vocalia Taldea has been invited to a large number of festivals and circuits in Spain and Europe (Italy, France, Ireland, Belgium, and others). Its concerts, praised by critics, define its trajectory highlighted by quality, originality and innovation.

The group collaborates frequently with diverse orchestras, soloists and cultural entities, and has received more than twenty awards in international competitions. In November 2019 he made a five-concert tour with the Euskadi Symphony Orchestra.

Basilio Astulez is professor of Choral Singing at the Municipal Conservatory of Leioa (Bzkaia) and founder of Leioa Kantika Korala children's choir in 2001, Kantoria the female youth choir in 2005 and the mixed SJB in 2007. This young choir school includes more than 150 vocalists from ages 7 to 25 years old and has already received numerous awards in Spanish and European competitions. In 2000, he founded the female chamber group Vocalia Taldea.

At the head of these groups, he has produced 10 recordings, embarked on a large number of international tours in Europe, Asia and America, and collaborated with important soloists, orchestras, conductors and groups.

In 2008, he received the special award for best conductor in the 47th C. A. Seguizzi International Competition in Gorizia, Italy, for his work at the helm of Leioa Kantika Korala.

In 2009, he again received the special award for best conductor at the 38th Florilège Vocal de Tours in France, for his work directing Vocalia Taldea.

He is currently a professor of Choral Direction for educational institutions, universities and various national choral federations and is frequently requested as a panel member for competitions and to offer choral singing courses and seminars in Europe, America and Asia. Since 2018, he is also professor of Choral Direction at the Musikene Conservatory in the Basque Country.